In his recently-published annual letter to shareholders, Berkshire Hathaway CEO Warren Buffett lamented a dearth of attractive acquisition opportunities in 2017:

“In our search for new stand-alone businesses, the key qualities we seek are durable competitive strengths; able and high-grade management; good returns on the net tangible assets required to operate the business; opportunities for internal growth at attractive returns; and, finally, a sensible purchase price.

That last requirement proved a barrier to virtually all deals we reviewed in 2017, as prices for decent, but far from spectacular, businesses hit an all-time high. Indeed, price seemed almost irrelevant to an army of optimistic purchasers.”

That last point is worth pondering, as 2017 was a record year for global debt issuance, and the 6th year in a row of increasing U.S. corporate debt issuance. Much of this corporate debt was issued to lower borrowing costs, lengthen average maturities, or finance stock buyback programs. Yet as Buffett observed, the widespread availability of credit also encourages risky deal-making, since “even a high-priced deal will usually boost per-share earnings if it is debt financed.”

The prototypical risky deal-makers are private equity firms, which use large amounts of debt to finance corporate buyouts, usually with a plan to improve operations and resell the target company several years later at a higher price (at which point even a modest increase in the firm’s value could translate into an attractive return on equity, given the high degree of leverage). For private equity buyers, the cost of debt is a critical assumption in their investment model. All else being equal, a lower cost of debt allows them to justify a higher initial acquisition price and still achieve their target return.

Unfortunately, a high degree of leverage also leaves little room to maneuver should the business encounter new competitive pressures, since most of the operating profit is already earmarked for debt service. Two major bankruptcies announced just this week (retailer “Toys R Us” and media company “iHeartMedia”) had their genesis in the prior cycle of aggressive private equity deals, circa 2005-2008.

Toys R Us was taken private in 2005 for $7.5 billion (including $5 billion of debt) by Bain Capital, KKR & Co., and Vornado Realty Trust. The retailer struggled to grow sales and profits due to competition from online retailers (a demographic headwind in its core customer base certainly didn’t help), but ultimately it was the persistently high cost of debt service which hampered the company’s ability to modernize its stores or enhance its e-commerce platform. As the chart below indicates, interest expense essentially consumed the bulk of Toys R Us’ operating income in the 12 years since it was taken private: 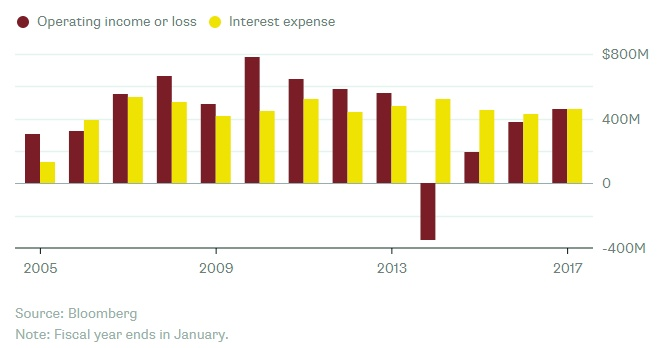 Bain Capital also partnered with another private equity firm, Thomas H. Lee Partners, in a leveraged buyout of Clear Channel Communications (later to be renamed iHeartMedia) that was first announced in late 2006 and finally closed in 2008. The deal saddled the newly-private company with approximately $20 billion of debt, which it struggled to pay down amidst a fragmenting media & advertising landscape which crimped revenues from its core business of radio and billboard ads. As with Toys R Us, the heavy debt burden limited the company’s ability to adapt to competitive pressures from upstart streaming platforms and other forms of digital advertising.

Without question, today’s permissive credit environment is sowing the seeds of future bankruptcies. The problem—to quote another famous Buffett aphorism—is that “you only find out who is swimming naked when the tide goes out.”

The Lottery Hackers
Our favorite long-read of the month “Jerry and Marge Go Large” tells the story of an unassuming Michigan couple whose retirement hobby was to legally game a loophole in the state lottery, earning themselves and a handful of associates nearly $8 million in profits over 9 years.

Last Week Tonight: Cryptocurrencies
Having back in December made our own attempt to steer clients away from the siren song of cryptocurrencies, we will be the first to admit that John Oliver’s take on the subject is much funnier.